Benjamin Netanyahu has actually fought real terrorists.  Not hemmed and hawed and delayed for 5 months before collapsing into the corner of the room and ordering real men to kill a terrorist.  And that’s why we respect Israel and hate our socialist man-boy President. 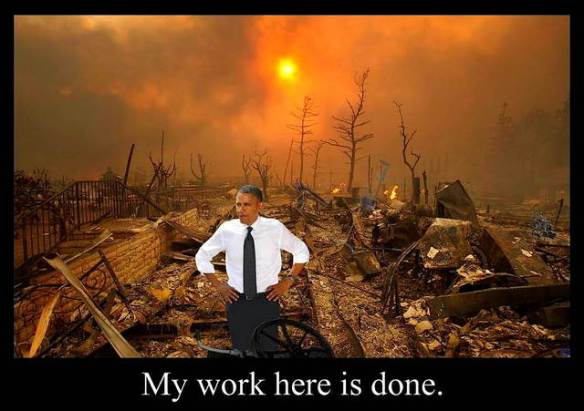 Even the Clinton News Network reporter noticed the difference.

So now we have the Immaculate and Utterly Perfect Messiah come to reign.  I’m sure that the banal pietes he produces as his gasbaggy inaugural address will be repeated endlessly and will soon be posted in every hippy-dippy classroom in America.

However, what we can hope for is that he fails in what he wants for America.  Because what he wants is going to destroy this country just as surely as the British Empire was destroyed from within.  By the haters and the class-envists and the believers in government.  By those who simply decided that living on the fruits of the labor of others was possible if you just got enough bums together to vote themselves bread and circuses.

That’s the Obama majority.  Gimme whatever you got, its my right!

Well, here’s hoping you fail utterly and completely in everything you do Mr. President.

The Most Holy and Self-Important One might be President-elect, but he’s certainly not my President.  And he never will be.

I will oppose everything he proposes, domestically or foreign–without exception.  Every statement will be parsed, every initiative derided, every single action exposed.  Every line of opposition to Him that develops outside the country will be trumpeted and continually repeated.

I will refute every statement and expose the lies and distortions.  Every slip of the tongue derided and mocked.  Every ‘uh,uh,uh’ away from the teleprompter recorded and replayed continuously.

I will work to do everything i can to make sure any of his policies are thwarted or stopped.  I will support all groups who will sue the government to stop implementation of any and all actions of The Holy Administration.  I will encourage his friends to over-reach and implement policies that will cause America  harm.  I will encourage The Holy One to nationalize as many parts of the economy as he can, simply because we know that any nationalization only means its eventual ruin and destruction at the hands of the bureaucrats.  I will support his efforts to tax the country into devastation.  I will encourage him to suborn America to the United Nations and to surrender our sovereignty and authority to an enelected bunch of thugs.  I will encourage The Precious And All-Knowing Ego to intervene in the lives of as many Americans as often as he can.  National identity cards, random search and seizure, shutdown of opposition voices in the press and the internet–all these things need to be implemented to remind America just what they have put into power.

I will do everything I can to spread truth regarding the theft and intimidation of The One or His minions.

I will wake up trying to think of what I can do today to oppose the Obamaunists.  I will make sure to keep the anger for him and his government and his actions alive every hour of every day.

I will discourage any Republican from ANY action in support of anything from this man.  Any Republicans that do work with him will be opposed and removed from office at the earliest opportunity.

He will never, ever be my President.  And all the opposition to George W Bush at home and abroad will only be the starting point for my work to undermine and cause the failure of the Messiah.

And knowing that his failure is built into his policies and outlook, I will remain happy.  Because I know that he will fail completely and utterly.  His America will experience attacks, humiliations, and reverses domestically and internationally.  I only hope it doesn’t cost any more lives.

This is a takeoff on the old Jesse Helms ad that was derided as race baiting.  Way to go people:

Harvey has a nice little fisking of the 10 point program that the Obamessiah is given over at the Huffpo:

At HuffPo, Robert Creamer lists “10” key steps for Obama, but it all boils down to one:

Face it. If Obama told the truth about his platform, he’d get blown out like Mondale in ’84. “I want to raise taxes, regulate our economy into stagnation, and talk to terrorists until they blow us up, after which I would talk to them even more.”

The individual points are great – I recommend the whole thing of course:

5). Nationally, the campaign must create a mass movement.
Lie to a LOT of people.

6). Democrats must convince skeptical swing voters that Obama is safely on their side.
Lie a LOT to a lot of people.

8 )  Democrats need to undermine public confidence in McCain’s competency and judgment with respect to the War in Iraq.
Lie about the war. Say things like “Only McCain would be stupid enough to believe that you can defeat terrorists by killing them”. Try to keep a straight face while doing so. 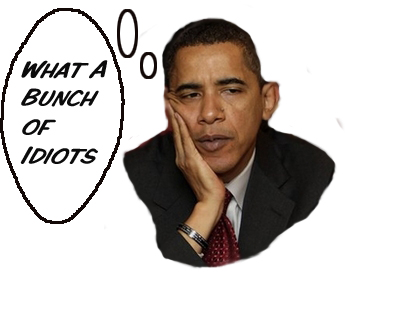 Colorado Right
Create a free website or blog at WordPress.com.